How are you creating positive change in your community? 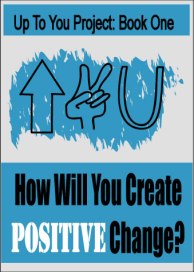 The Up To You Project encourages people to solve problems and create sustainable solutions in their communities. By sharing our experiences we can inspire and encourage others to get involved. A single person can do amazing things, but together we can change the world.

Mission: To encourage community involvement on a local and global scale.

This will be accomplished in three ways:

1. Promote the work of individuals and organizations around the world who need volunteers to continue creating positive change.

2. Share the experiences of all people who volunteer to improve their communities.

3. Give Up To You books to libraries and schools

Send us your experience through out My Volunteer Story page.